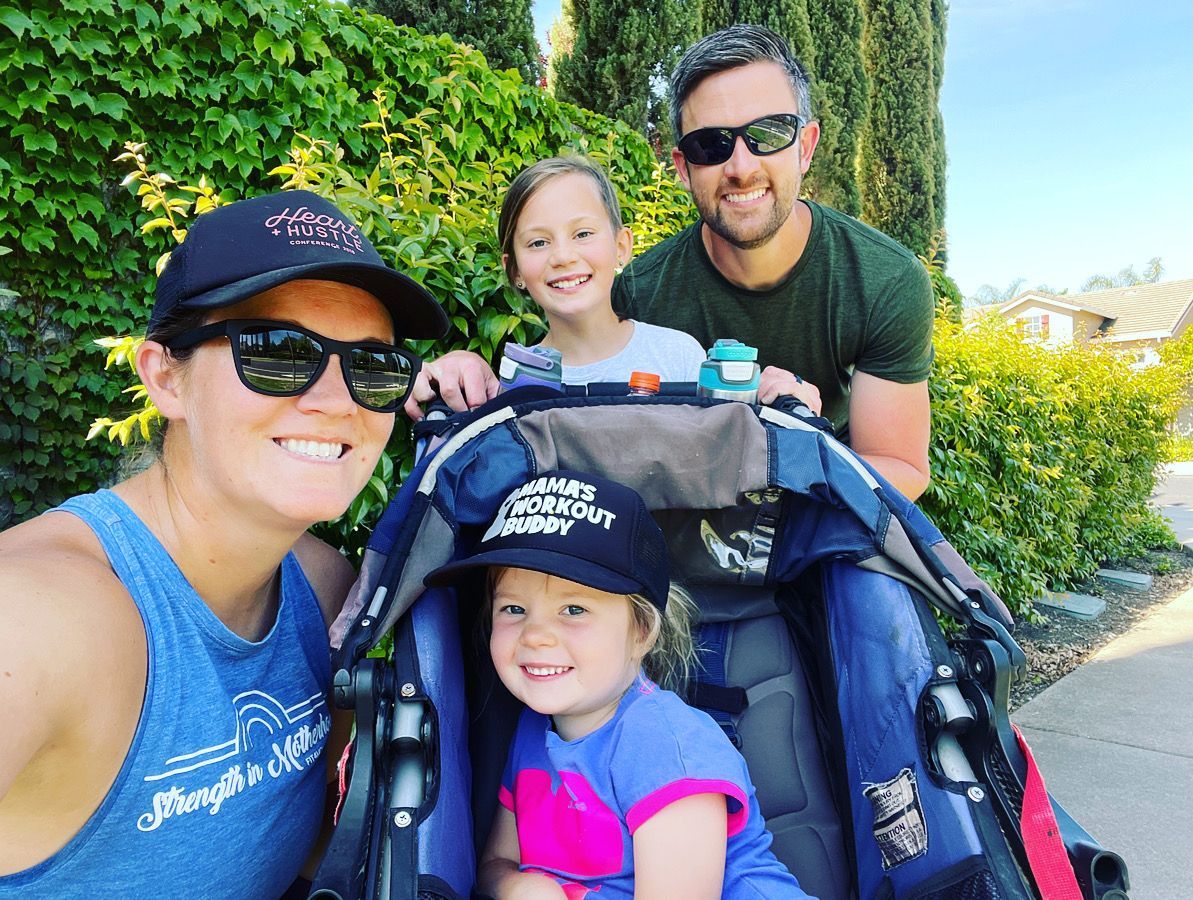 Each month, we are celebrating a member of FIT4MOM West Sacramento/Natomas for her commitment to a healthy lifestyle and dedication to FIT4MOM.

This month, I decided to share more about me as I celebrate my birthday!

Tell us about who is in your family!

Dan and I are high school sweethearts and have been together since June 2005. He was finishing his junior year and I was at the end of my sophomore year. We met through a mutual friend who was on the track team with me. It wasn't until a few years later that we realized we had first met in junior high in band class (Dan played trumpet and I played clarinet). He had just moved to Point Loma in the middle of 8th grade and I thought he was this cute, mysterious guy at the back of the classroom. He thought I was the obnoxious girl who was always challenging the older clarinet players for 1st chair. We continued to date through college while Dan was at University of Redlands and I was at Cal Poly Pomona. We got married August 21, 2009 on the cliffs of San Diego.

Where is your hometown?

I was born and raised in San Diego, CA in the town of Ocean Beach. My first move ever was when I went to college.

What was your career before having babies?

My degree from Cal Poly Pomona in 2011 is a bachelors of science in Civil Engineering. I went on to be a Project Engineer for a General Contracting company in Riverside, CA

How did you find FIT4MOM?

I first heard about FIT4MOM in 2013 (when it was still just Stroller Strides) when I was pregnant with Maddi. I was looking around on Meetup.com about Mommy & Me groups. I remember thinking that paying to workout with other moms was the stupidest idea I had ever heard of 🤣 and I would never do such a thing. Fast forward a few months to a brand new mom who was home with her 3 month old and in tears because I had no friends. My best friend helped me find a local moms group who met up at the park and their next meetup was Pie Day!

I showed up with my BOB stroller and it just so happened to be the same park where Stroller Strides met. After class, a mom named Christine said "hey, I think you should come join us? I'm going to class tomorrow. Come join me." It was the best invite I've ever gotten and I've never looked back!

How long have you been a member of FIT4MOM West Sacramento/Natomas and what has it done for you?

I started with FIT4MOM Riverside in 2013 almost 9 years ago and I'm so happy I made the jump to join! I was the mom going to class 5 days a week because I just needed a reason to get out of the house.

Before Maddi's first birthday, Dan got offered a job in Sacramento and my first question was "Is there a Stroller Strides? I can't move if there isn't Stroller Strides!" When we arrived in Sacramento in April 2014, we had an apartment in Orangevale off Hazel and 50 and I drove 5 days a week to Land Park and McKinley Park to be a part of FIT4MOM Sacramento. I don't even want to know the amount of miles I drove and gas I bought, but I knew it was what I needed to be happy as a mom. I found life long friends for not only me, but for Maddi.

In February 2015, I became certified as a Stroller Strides/Fit4Baby and Body Back instructor for FIT4MOM Sacramento. I found true love for fitness and helping moms. When we moved to West Sacramento in 2018, I wanted to continue to grow the amazing FIT4MOM community where I was raising my girls and opened FIT4MOM Northwest Sacramento in November 2018.

What is your favorite class exercise?

Running is 100% my favorite form of exercise. I ran cross country and track in high school and then went on to compete in track and field in college at Cal Poly Pomona.

While my pace is no where close to what it used to me, I still love it as a space to clear my hear, get fresh air and stay active. I love even more that Maddi has found a love for running and is finishing her first season of track with the local Delta Hawks distance team and is planning to run cross country in the fall.

What is something that has surprised you about motherhood?

How hard it is! I grew up babysitting and have always loved kids. I always knew I wanted to have kids. Your limits are continuously tested between sleepless nights with a baby to frustrating toddlers to sassy 9 year olds. But with the help of my FIT4MOM community, they have provided me with countless suggestions to make parenting just a little bit simpler and lots more fun!

What are 3 of your favorite things?

What is your proudest mommy moment so far?

When both my girls went to preschool for the first day, I was convinced they would want me to hold their hand all the way there, they would hold me tight outside of the classroom, and there would be tears as we walked away. But they both surprised me with their confidence and ability to run right up and never look back! It made me realize that I have raised strong, confident girls who are ready to take on the world!!

What advice would you give to a new mother?

Find your village of mamas!

I'm so happy I found FIT4MOM and I am so thankful for each and every one of the mamas in this group!